Well! Evan has a blanket that he loves, that he’s had for… who knows how long. This is the liner from inside of it. Over the last several months it has gone from a blanket to more of a … fabric sack of pillows and sheets. It is sooooo uneven… it just does not work as a blanket anymore. Yet he loves it! But he loves it for the outside fabric. So there’s issue #1.

Issue #2… is I had a blanket liner from Ikea that I had used when I made my own comforter out of 36 t shirt squares. That one got old and I ended up ditching the outside and keeping the inside liner. So! I ripped out this old liner, got out the sewing machine and replaced it with my Ikea comforter. Now it’s nice and even and Evan’s got his blanket back! Plus I’m not storing an extra comforter with no cover. Win-win!

Another belt that I got at the thrift store at the dump/recycling centre. Once in a while they have a deal where you can fill a whole bag for a couple bucks. I got this a long time ago and had intended to use it as a purse strap in some spontaneous sewing project. Never got around to it, can’t imagine I will be anytime soon. Off it goes!

I can never remember what these are called… I feel like… it starts with a B… Anyway! I don’t need it. Can’t remember where I got it, although I know for sure it was free. Just hangs around the house and never gets used… so… we may as well get rid of it.

Ah! A carabiner. I think that’s the right word. 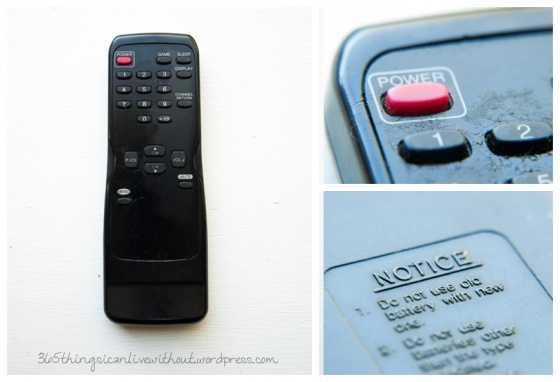 I got this lanyard when I went to a print show in October(ish) of last year. We had to wear this to show our passes to get into the show. Probably don’t need it anymore though… 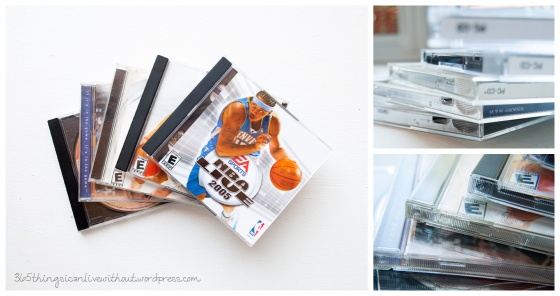 These are Evan’s games from way back. He kept the games (CDs) for the memories but is getting rid of the cases to take up less room. (Which works for me!)

While we were living in Beeton in an apartment our cell phone signal was not good enough to make calls with them, which is why we used these phones. When we moved to a place with better cell reception we decided to ditch the phones (and the phone bill), and just use the cell phones. They’re good phones, they work well, but we don’t use them anymore.

365 things I can live without.
Create a free website or blog at WordPress.com.