How cute are these socks!? I like them. Unfortunately I’m pretty sure to wear them correctly your legs need to be relatively skinny. Which mine are below the knee, but above is a different story. My family genes do not allow for such things, and I’m quite sure I’m destined to have non-skinny thighs/legs forever. Which doesn’t really bother me, except that I’d like to wear these socks. Alas! I cannot, so out they go!

We have a few too many glasses in our cupboard. I never ever use these ones, and when Evan does I think, ugh… now I have to wash this skinny little glass that I can’t even get my hand into. As we don’t have a dishwasher, it’s really annoying to have glasses that are not wide enough to me to get my hand into to clean it properly. So then why do we even have these ones, if I don’t use them and I hope no one does?

A few more notebooks from when I went through all my notes from college a few days ago. I think I’ll bring a couple to work with me (out of the house though, it counts!) and give the rest away. 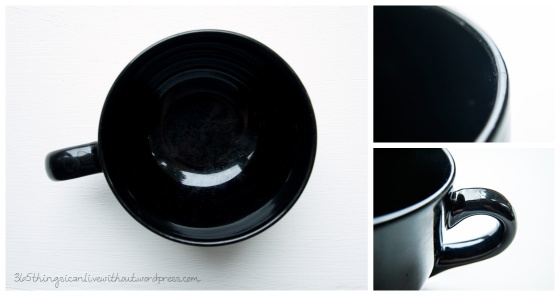 I like this mug. I like it a lot. But I love my Batman mug more… and the mugs I used when I was little… and my “you never forget your first” (Atari) mug.

I like this mug. But the cupboard has quite a few mugs in it, and there just isn’t room for all of them. As I’m not willing to part with the other ones, this one is the one to go. 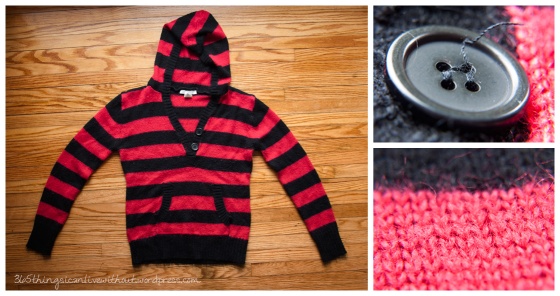 I’ve had this sweater since high school… I believe I got it for 5 bucks at a store closing sale. I’d say I probably got my money out of it. I don’t wear it anymore though… I considered getting rid of this about a month ago, but told myself I would wear it. I didn’t! Into the donate box it goes.

This is one of Evan’s spring jackets but he doesn’t wear it and says we don’t need to keep it. He’s really more of a sweater or winter coat type. There’s really no inbetween. May as well be of use to someone else rather than hanging in the closet, right? Right.

I made bread last week in my breadmaker. (Mmmm!) I dug around in my knife drawer to find my very best bread knife (part of a knife set I got for Christmas from Evan’s parents). When I was done with it I threw it in the sink, and later went back for more bread. Not wanting to clean the knife and knowing I had other bread knives I searched the drawer for another one. Did not go so well. It just would not cut through. So I tried another, with no better results. Eventually I just rewashed the knife from earlier. So! That basically means these 2 knives are useless.

I thought about just putting this in with the camping stuff but really, when am I going to need a bread knife while camping? Never. These ones are going! Which means I’ll be able to find my good bread knife a lot quicker now. I’m sure I’ll have to go through that drawer before the year is done and find some more knives that I don’t use. Both because I keep moving knives around the find the one I want, and because I’ll probably be so desperate to find things to get rid of by the end of the year. I should probably stop screwing myself over by getting rid of things in multiples and stick to one a day.

Having gone to college for 5 years (and just finished!), I’ve gone through a lot of notebooks. So I ripped out all the pages I’ve used and I’m left with a bunch of notebooks (with many blank pages left in them) that I don’t really need. So I will either find someone who can use these, or add them to the donation box.